The Buddhist pilgrimage tour takes you through not only important Buddhist pilgrim places but also showcases the splendor of the Taj Mahal, the colors of Rajasthan & Delhi.
Varanasi : Tour Packages : Buddhist Pilgrimage Tour 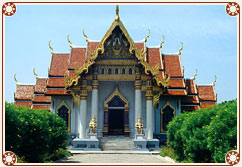 Day 01: Arrival at Delhi
On arrival you will be received by our representative and transferred to hotel. Overnight stay at hotel in Delhi.

Day 02: Delhi
In the first half of the day, take a city tour covering the Laxmi Narayan Temple, India Gate and the Parliament House. In the afternoon, the city tour of Old Delhi covers Jama Masjid, Red Fort and the Gandhi memorial. Spend the evening enjoying the sound and light show. Overnight stay at hotel.

Day 03: Delhi- Jaipur
In the morning, you will be driven to Jaipur by road. Arrival at Jaipur is followed by check-in into hotel. Spend rest of the time roaming around the nearby areas. Overnight stay at hotel.

Day 05: Jaipur- Agra
Agra is the next destination in the itinerary. You will be driven to Agra via Fatehpur Sikri, the old deserted town of the Mughal Dynasty. The attractions at Fatehpur Sikri are Buland Darwaza, Panch Mahal, Jami Masjid and Jodha Bai's Palace. Arrival follows check-in into hotel. Overnight stay at hotel in Agra.

Day 06: Agra - Varanasi
Morning city tour of Agra includes the Taj Mahal, Red Fort and the Tomb of Itmad-ud-Daula. Later in the evening check out of the hotel and transfer to Tundla Railway station for overnight train to Varanasi. Overnight will be on train to Varanasi.

Day 08: Varanasi - Bodhgaya
Get a real feeling of Varanasi-the gate to Moksha, by early morning boat ride on River Ganges. Later in the morning you are driven to Bodhgaya, visiting Sarnath on the way. Arrival at Bodhgaya follows check-in at the hotel. Overnight stay at the hotel.

Day 09: Bodhgaya
The day begins with sightseeing of Bodhgaya and later excursion to Rajgir and Nalanda.

Rajgir: Rajgir is an important Buddhist pilgrimage place. Lord Buddha spent a considerable part of his life and the first Buddhist council was held here (after Buddha attained Nirvana).

Nalanda: Nalanda was a great center of Buddhist learning in ancient times. The Nalanda University was founded in the 5th century and developed as a center of intellectualism. Overnight stay at hotel in Bodhgaya.

Day 10: Bodhgaya - Vaishali - Kushinagar
From Bodhgaya proceed to Vaishali. Lord Buddha delivered his last sermon and announced his impending " Nirvana". Highlights of Vaishali include the Ashoka Pillar, Lotus tank and Chaumukhi. The next destination after Vaishali is Kushinagar. Arrival at Kushinagar follows check-in at the hotel for overnight stay.

Day 11: Kushinagar - Lumbini
Excursion at Kushinagar starts with a visit to the Mahanirvana Temple and follows visits to the modern Japan/Srilanka Buddhist center and monasteries. Thereafter proceed to Lumbini (the place where Lord Buddha was born). Overnight stay at hotel in Lumbini.

Day 12: Lumbini - Kapilvastu - Sravasti
In the morning, visit the Ashoka pillar (249 BC), Mayadevi temple, the ruins of an old monastery and some new Stupas. In the afternoon you will be driven to Sravasti, where lies the extensive ruins of this ancient city and the famous Jetavana Monastery. On arrival at Sravasti, you will be transferred to hotel for overnight stay.

Day 13: Sravasti - Lucknow
In the morning a city tour of Sravasti is arranged and later you will be driven to Lucknow. Check-in at the hotel for overnight stay.

Day 14: Lucknow
Morning city tour of Lucknow covers Imambara, Rumi Darwaza and other historical monuments. In the evening transfer to Airport for flight to Delhi. On arrival transfer to hotel for overnight stay.