India mystical tour is a journey into the religious, spiritual and mystical aspects of India. As you traverse across various cities, you come to feel the difference yourself.
Varanasi : Tour Packages : India Mystical Tour 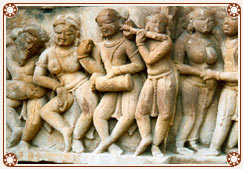 Day 02: Bombay- Rajkot- Gondal
In the morning, you will be taken to the Elephanta Island, riding a boat across the Mumbai Harbor. The Elephanta Island is famous for its cave temples. The carved cave temples here are dedicated to the Hindu God - Shiva. An afternoon city tour of Mumbai follows. It covers the Prince of Wales Museum, Gateway of India, Hanging Gardens and Kamla Nehru Park. In the evening you will be transferred from hotel to the airport for flight to Rajkot. On arrival at Rajkot you will be received and transferred to Gondal. On arrival check in at hotel followed by overnight stay.

Day 03: Gondal-Bhavnagar
Gondal was formerly a princely state. It is a fortified town, located on river Gondali. You will be taken to see the vintage car collection of the Maharaja of Gondal. Other attractions at Gondal are the 500 years old Palace and temple. Lunch follows a drive to Bhavnagar. On arrival you will check-in at hotel. Overnight stay will be at hotel.

Day 04: Bhavnagar- Palitana- Ahmedabad
Early morning you will be driven to Ahmedabad via Palitana. Palitana is famous for its Jain temples. Located on Shatrunjaya hills, there are 863 temples, elegantly carved in marble. The Palitana temples were built over a span of 900 years. Continue your journey to Ahmedabad. On arrival you will check-in at hotel in Ahmedabad. Overnight stay will be at the hotel.

Day 05: Ahmedabad
Ahmedabad is a historical city. After breakfast you will be taken for a sightseeing tour of Ahmedabad, covering the Jama Masjid, the Sidi Sayyad's Mosque, Gandhi Ashram, Akshar Dham temple etc. You will also be taken for a visit to the Calico Textile Museum as well. Overnight stay will be at hotel.

Day 06: Ahmedabad- Mount Abu
Early morning, you will be driven to Mount Abu, visiting Modhera, Patan and the Havelis of Sidhpur on your way.

Modhera: Modhera is famous for its Sun temple. It is one of the finest examples of Indian temple architecture. Built in 1026 A.D, the temple is dedicated to the Sun God, Surya. Every inch of the edifice, both inside and outside is magnificently carved with sculptures of Hindu Gods and Goddesses, birds, beasts and flowers.

Sidhpur: Situated on the banks of river Saraswati, Sidhpur is famous for Havelis of the Vohra community and Hindu pilgrim center. The best way to appreciate the marvelous carvings and the glass paintings at Sidhpur is to take a guided walk along the narrow streets.

On reaching Mt. Abu, you will check-in at hotel. It is followed by an afternoon sightseeing tour of Mt. Abu. The sightseeing includes visits to the famous Dilwara temple, Nakki Lake and the Sun-set Point. Overnight stay will be at the hotel.

Day 07: Mount Abu- Udaipur
In the morning you will be picked from the hotel and driven to Udaipur via Ranakpur. Ranakpur is famous for its beautiful Jain temples and is one of the important Jain pilgrimage centers. Continue your drive to Udaipur. On arrival you will check-in at hotel. Overnight stay will be at the hotel.

Day 08: Udaipur
Udaipur is one of the most fascinating and colorful cities of Rajasthan. In the morning you will be taken for a sightseeing tour of Udaipur. Sightseeing includes Lake Pichola, City Palace, Jagdish Temple, Bagore ki Haveli, Fateh Sagar Lake, Saheliyon ki Bari, Gulab Bagh, Bharat Lok Kala Museum etc. In the afternoon cruise on the calm waters of Lake Pichola. You will also be taken to the Jag Mandir Palace, the other island palace in the middle of the lake. Overnight stay will be at hotel.

Day 09: Udaipur- Jaipur
Breakfast at hotel follows transfer from hotel to the airport to catch the flight for Jaipur. On arrival at Jaipur you will be received at the airport and transferred to hotel. An excursion to Amber Fort follows. In the afternoon you will be taken for a tour of Jaipur, the Pink City of Rajasthan. Sightseeing at Jaipur includes Jantar Mantar (Observatory), the City Palace and its Museum, the Hawa Mahal etc. Dinner at hotel follows overnight stay.

Day 10: Jaipur-Agra
In the morning you will be picked from the hotel and driven to Agra via Fatehpur Sikri, the deserted city, built by the Mughal Emperor Akbar. The places of interest at Fatehpur are the Bulund Darwaza, Jodha Bai Palace and the Panch Mahal. Continue your drive to Agra and check-in at hotel upon arrival. Overnight stay will be at the hotel.

Day 11: Agra
After breakfast you will be taken for a full day sightseeing tour of Agra, visiting the Taj Mahal (the epitome of love and romance), Agra Fort, Itmad-Ud-Daulah's Tomb and Sikandra (Akbar's tomb). Evening free to relax. Overnight stay will be at the hotel.

Day 12: Agra- Jhansi- Orchha- Khajuraho
After breakfast, you will be transferred from hotel to the railway station to board the Shatabdi Express train to Jhansi. On reaching Jhansi proceed to Orchha. Orchha was once the capital of the Bundela Kings. The places of interest at Orchha are the Jehangiri Mahal, the Raj Mahal and the Laxminarayan temple, both noted for their fine frescoes and Mural paintings. After lunch, you will be driven to Khajuraho. On arrival at Khajuraho you will check-in at hotel. Overnight stay will be at hotel.

Day 13: Khajuraho- Varanasi
Khajuraho is a temple town, known for its beautiful, exotic and stunning temple architecture, sculpture and craftsmanship. The places of interest at Khajuraho include the erotic temples (built by the Chandela rulers) and the township. In the morning you will be taken for a sightseeing tour of the above-mentioned places. In the afternoon transfer to the airport to catch the Khajuraho/Varanasi flight. At Varanasi you will be received and transferred to hotel by our representative Afternoon sightseeing tour of Varanasi follows. Get a glimpse of the spiritualism at the Ganga Ghats (river front) and also visit some temples on the Ghats. Overnight stay will be at hotel in Varanasi.

Day 14: Varanasi- Delhi
Early morning, get ready to experience one of the most memorable moments of your life, as you will be taken for a boat ride on the Ganges. It is at the Ganga Ghats of Varanasi where you get to see both life and death together. This mystical and spiritual experience is followed by an excursion to the Buddhist town of Sarnath. Lord Buddha gave his first sermon at Sarnath. The places of interest at Sarnath are Buddhist temples, the Dhamekha stupa, the Chaukhandi stupa and the Archaeological museum. In the afternoon you will be transferred from hotel to the airport for Varanasi/Delhi flight. At Delhi, you will be received and transferred to hotel. Overnight stay will be at the hotel.

Day 15: Delhi
Delhi, the capital of India has a long and great history behind it. Delhi has seen its heyday since the Delhi Sultanate (12th century). In the morning you will be taken for a sightseeing tour of old Delhi covering the Raj Ghat, the Jama Masjid, the Red Fort and Chandni Chowk. Afternoon sightseeing tour of New Delhi covers Humayun's Tomb, Qutub Minar, Rajpath, India Gate, Parliament House and the President's House. Late in the evening you will be transferred to airport for onward destination.